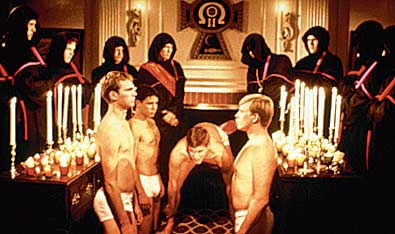 Morgan Stanley clients should think long and hard about what’s in it for them, seeing how that is all Morgan Stanley is thinking about.

According to Sarah Krouse and Michael Wursthorn of The Wall Street Journal, “Morgan Stanley has already decided that as of next week its brokers will no longer be able to sell clients new positions in Vanguard mutual funds.”

Because offering clients quality, low-cost funds is a horrible thing to do?

No, Morgan Stanley would rather push product that pays the firm more (even though it may be at the expense of clients’ returns).

Thank you, sir.  Can I have another?

It’s bad enough to get screwed over; but to pay for the privilege?  Pass!

Sadly, I’m not surprised.  In fact, almost 30 years ago I had a painful glimpse of the ugly underbelly of Dean Witter Reynolds (“DWR”).  Ironically, the firm merged with Morgan Stanley back in 1997; just one of many birds of a feather, I’m afraid.

I worked in the external mutual funds department; a group of five people dedicated to servicing brokers’ inquiries relating to those mutual funds outside of DWR’s proprietary InterCapital funds.

We were a hardworking bunch of red-haired step children.  No one paid attention to what we were doing, because the in-house funds were selling really well, and making the firm a ton of money.

I worked with a guy who loved numbers and analysis, and he decided it would be a great project to compile a list of funds that performed well relative to their respective categories.  Unlike many “recommended lists” out there, funds had to qualify based on history and real data.  (FYI — It’s not uncommon for funds to “pay” firms to be on a recommended list.)

In addition to the quarterly performance report, we made up a directory of all of the outside funds that the DWR brokers were permitted to sell and hold at the firm.  We even gave them information about no-load funds that clients might want to purchase; many brokers would assist (and build good will) by helping their clients purchase funds they would never be compensated for selling.

It was the late 1980s /early 1990s and the industry was still smarting from the October 1987 crash that kicked off massive consolidation in the industry.  Some brokers realized they may not stick around for that gold watch after all, and decided that selling funds that couldn’t move over to another firm wasn’t a good idea.

Even though they were paid more to sell the in-house InterCapital funds, many (aided by our department’s work) started selling external mutual funds instead.  No one noticed at first … until they did.

InterCapital, which had once accounted for 75% of all the firm’s mutual fund sales, gradually saw that ratio reverse in favor of external funds.

The department was told to cease and desist; all activities that would support external mutual fund sales were killed.  Gone were the directory and the list.

Some brokers tried to go rogue and sell the funds that they thought were the right fit for their clients.  They soon found out that their compensation was at risk.  For those true cowboys who still didn’t march in line, the firm went after their complicit Branch Managers, dinging their budget, compensation and bonuses until they were forced to cry “uncle.”   The choke collar was in place.

And while the Berlin Wall had come down just years earlier, it sure didn’t feel that way at DWR.

Unfortunately, many clients are oblivious to the motivations behind the “recommendations” brokerage firms force their brokers to make.

As the article accurately points out, “Brokerages including Morgan Stanley rely on their compensation plans to nudge advisers to focus on selling certain products and services. Morgan Stanley in recent years has started offering its advisers incentives to push banking products like mortgages, for example. By excluding Vanguard funds from its compensation structure, Morgan would effectively be giving advisers a disincentive to keep clients in those funds.”

They are discouraging brokers from using low-cost, investor-friendly funds.

I wouldn’t buy a box of Girl Scout cookies from Morgan Stanley (or from the many other puppet-masters with equally “established” and “respectable” names).

15,000 Morgan Stanley brokers oversee over $2 trillion in client assets; chances are you know at least one poor sucker who has an account with them.  Do your good deed of the day, and pass along The Wall Street Journal article.

Then let them decide if this obvious conflict of interest works for them.  If so, they can knowingly assume the position.