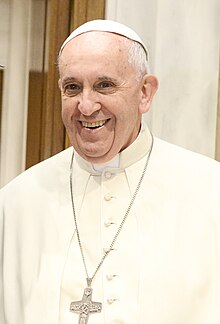 Coming up on the (gasp) 30th anniversary of my graduation from Fairfield University, I find myself nostalgic for the courses that taught me so much beyond the classroom.

The (late) Dr. Art Anderson gave his Sociology students much to chew on, including this nugget:  “In the work world, all of you are ahead of the game.  You have straight white teeth and a nice smile.”

He wasn’t paying us a compliment though.  Being a Jesuit school with an emphasis on education and social justice, the underlying challenge was to be more than another fresh face in a fancy suit with a captivating smile. If you’re not familiar with Jesuits, think Pope Francis; the most outspoken Jesuit of all.

The financial services industry could use a little Jesuit influence, if you ask me; everyone would be a fee-only fiduciary.

Regardless of religious affiliation (or lack thereof), financial professionals would do well to take a page from the Pope’s book:

When I speak with people who are unhappy with their advisors, none of these attributes appears to be present.

These disgruntled people have felt shamed, embarrassed, ignored, marginalized or taken advantage of.  Intentional or not, these advisors spoke in a language that put their clients at a handicap at the get-go.  They never divulged the motivation behind their recommendations was directly tied to how much they earn; and it was reflected in portfolios “constructed” with no rhyme or reason.

In short, their actions were guided by transacting for the client to make the most money.

In a recent TED Talk, Why the Future Worth Building Includes Everyone, Pope Francis said, “Only by educating people to a true solidarity will we be able to overcome the “culture of waste,” which doesn’t concern only food and goods but, first and foremost, the people who are cast aside by our techno-economic systems which, without even realizing it, are now putting products at their core, instead of people.”

I don’t believe that the Pope was specifically referring to the financial services industry, but clearly it has application here – and to life in general.  Substitute any word for product (money, power, prestige) and everything shifts away from caring for people.  Nowhere has this been more apparent than in the Wild West of retirement plans for teachers, where I have seen people taken gross advantage of; the fact that it is legal turns my stomach.

I am very fortunate to be surrounded by colleagues who do care.  They support the endeavors of my husband, Tony, and me as we try to educate and right the wrongs we see in the 403(b) space; where teachers, and other non-profit employees have a minefield to navigate.

Working with clients in a meaningful way; addressing their fears and concerns; helping them plot a course through it all; and assuaging their discomfort is more rewarding than any fee I can be paid.  Making sure they don’t fall prey to unscrupulous salesmen just waiting to sell them an annuity with 3% in annual fees and surrender charges that last 15 years, is an added bonus.

I’ve been accused by some of being too Pollyanna for this industry.  I’ll take that as a compliment.

In the words of Pope Francis, “…each and everyone’s existence is deeply tied to that of others: life is not time merely passing by, life is about interactions.”

Focusing on the quality of those interactions can make the future very bright, indeed.

Too bad some of us need reminding.