“I’m mad at myself for wasting time,” he said.  “Nine whole years have passed that I won’t get back, and I did nothing!”

I suppressed a laugh, but I was not making fun; I was astonished.

I’ve heard this many, many times but this guy was different.  He was 25 years old, lamenting about what he did not do at age 16.

His wise grandmother had told him to start contributing to a Roth IRA when he was 16.  She showed him how $5,500 invested annually until he retired at 66 would likely grow to over $1 million if he received average market returns.

She was right to encourage him early on.  I always tell young people that it doesn’t take a lot of money to grow money – it takes time, discipline and consistency.  Those three components can super-charge a retirement fund.

In my experience, however, people mistakenly think that a small commitment is not worth making.  They wait to save up until they have a big stash to plunk in all at once.  Unfortunately, this usually falls by the wayside.  Other expenses creep in  — like getting a new car.

Or they become distracted by what the market is trading at and they stand on the sidelines waiting for the right time to jump in.

To someone young and not earning much, it can seem like there is no place at the grownup table – trust me, there is.

A consistent, disciplined plan (think automatic investments deducted from a bank account every month) is better for many reasons.  $100 a month might not be noticed in the monthly budget – but writing a check for $1,200 might cause a hand-freeze.

The market is up?  The market is down?  No big deal because shares are being bought monthly so the share price averages out.

In Tiny Improvements, Big Results, my colleague, Ben Carlson, shared just how meaningful small changes can be.  While this example is hypothetical and assumes a market return of 6% (not an unrealistically high return; but the market never generates a fixed, consistent return), the takeaway is how powerful compounding is, even when done in small increments.

But, by increasing the amount to just $30 a month, the account could grow to over $215K.

And, if every year that monthly amount was increased – the results are astounding: 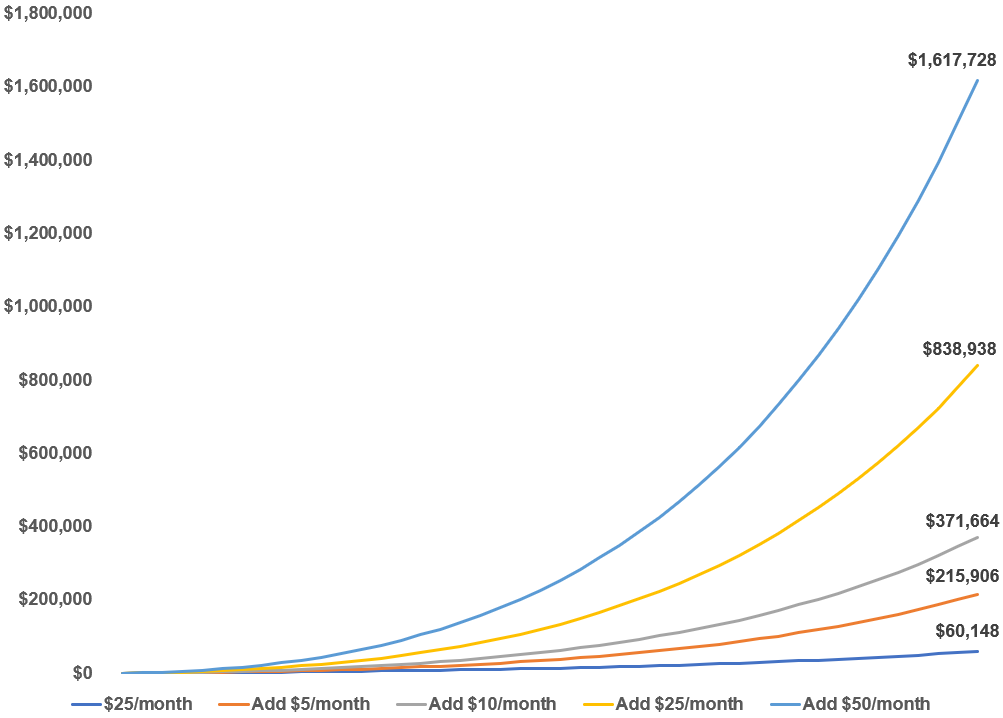 As Ben points out:

“Saving $25/month over the course of a year is only $300 in total but adding $50/month to that total every year using an incremental approach can add up to a fairly large sum of money through a combination of diligent saving and compound interest.”

So, if you’re young – know that your “little” savings can yield big results if you do three simple things:

Compounding does not discriminate.  It likes all contributions, big and small.

If you are reading this and you are already older and wiser, be like the grandma who encouraged her grandson.  Share this with someone who needs a reason to get started now.

As for that 25-year-old, I told him he still has miles of road ahead of him.  If he uses his remaining time well, he’ll stop beating himself up for missing out from ages 16-24.

I have no doubt he will.